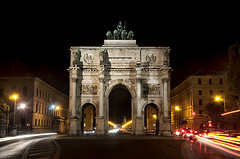 In early May I’m taking a beer trip to Munich, Germany. You could say that I’m excited.

In 2006 I spent a day in Munich while traveling in Europe. I almost wish I hadn’t because it was so much fun I didn’t want to leave. It’s been a while, but I’m finally going back.

I want to make sure I do it right though, so I thought I would share with you my plan of attack. I also know that many BillyBrew readers have been to Germany and I’d be an idiot to not tap into that knowledge. I’ll be traveling with my photographer aka Dr. B aka Dad. He’s always wanted to go to Germany and I’m glad we can do this trip before he becomes an old(er) fart.

Here is the gist of the trip:

How am I preparing for the trip? I’ve been doing my homework for sure. Here is what I’ve found especially useful.

? It has very detailed guides on breweries and beer gardens with maps and essential travel info. It doesn’t go much into the beer itself, but for an American traveler unfamiliar with the city it is as the cover says, indispensable.

has also proved very helpful as has Stan’s blog of course.

Speaking of blogs, Beervana has been another great source of info. Lucky for me, Jeff is in the middle of writing a beer book and has had some stellar posts recently about Germany.

In the past I would glance at the German beer section, raise an eyebrow at the impossible names, and move on to the American craft beer selections. Sure I’ve had the flagships from the big names, but I never ventured much outside of that territory.

Lately, however, I’ve made an effort to drink my way through the entire lineups of German breweries. I want to be familiar with them when I’m there as well as answer that age-old question, “Is it really better at the brewery?” I’m guessing the answer is “yes”, but I want to find out for myself ; )

The German language is tough and I didn’t take it in school. I’m not expecting to be able to have a conversation in German but I would like to read basic signs, menus, etc. and know how to pronounce things correctly. I’ve been using Duolingo for language learning and have progressed pretty quickly. It’s been shown to be as or more effective than Rosseta Stone, not to mention it’s free. Do check it out.

Duolingo doesn’t focus much on beer though and those brewery names are tricky. I was able to find this gem of a playlist on YouTube with German brewery pronunciations. Don’t feel bad if you’ve been way off on some. I have too.

As I said above, I’d be foolish not to ask for reader feedback. Who’s been to Munich? Have any tips?