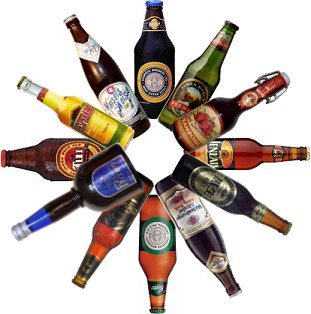 It’s a shame really. Pick a random Joe off the street, ask him to name 3 different beer styles, and chances are he’ll spit out the following: “Bud, Coors, and Miller.” And another fairy loses its wings….

You on the other hand, the soon-to-be enlightened beer drinker, won’t be the cause of fairy dismemberment any time soon. Joe would be shocked to learn that there are in fact over 100 styles of beer, and his 3 fall into but one of those.

Beers styles are categories assigned to beers based on their flavor characteristics and location of origin. All beer styles fall under the categories of ales and lagers. Ales being the heavier, more intensely flavored stouts, pale ales, and hefeweizens of the world. Lagers being the clean and crisp pilsners, bocks, and helles beers.

The style groups were created around common sensory traits – appearance, aroma, flavor, and body. The stout guidelines, for example, describe it as a black ale with coffee like aromas, roasted malt flavors, medium hop bitterness, and a creamy mouthfeel (the actual guidelines go into much more detail). That makes sense, but who exactly is this setting the guidelines?

Beer styles aren’t written into law, but the most well-known and used style guidelines are those written by the Beer Judge Certification Program (BJCP). You see, when beers are entered into competitions, they are submitted under a specific style.

It’s a lot like putting your dog into a dog show. You would submit your beagle in the hound category, and your chihuahua in the toy dog category. Similarly, if you were entering your beer into a competition you would enter your ‘Sultry Stout’ in the stout category and ‘Uncle Jimbo’s Pale Ale’ in the pale ale category. As in dog shows, the entrants are judged against the generally accepted standards for that category.

You can take the Beer out of Bavaria, but…

It’s important here to point out that besides beers being similar in appearance, aroma, and taste, the place where a beer style originated plays a large part in how that style was shaped. Early brewers didn’t wake up one morning and say “I’m going to make a beer that is black and creamy and call it a stout!”

Beer styles arose largely out of the ingredients available to the people of that region and many other circumstances that affected their finished beer. The Belgian Saison for example arose from the need to quench the thirst of the farmers working their butts off in French-speaking Belgium.  As a result, the Saison is an incredibly crisp, cleansing, and refreshing beer. It is still known as the “farmhouse ale.”

So how do you find the style that will rock your world? They key is to start paying attention. The next time you go to the bar and order a beer, choose a style you haven’t had before.  Any decent beer bar should organize its beer by style, and at the very least the bartender should know them. If you find one you like, make a note of it. Try a different style next time. Then another, then another.

For more guided direction, each post in my Beer Mission series has a list of styles and specific commercial examples for you to try.

You’ll likely find a bunch of types of beer that you like, but there may be one or two that become your go-to styles. Just like jelly beans, people usually have a favorite. So what is it (beer style and jelly bean)?