The beer industry has latched onto Kickstarter in a major way.

The fundraising platform with its social nature and quirky promo videos is the perfect fit for a new brewery looking to raise some cash. A search for “brewery” brings up 137 results.

Now we’re seeing all sorts of beery ventures, beyond just breweries. Here are some cool ones I’ve been following: 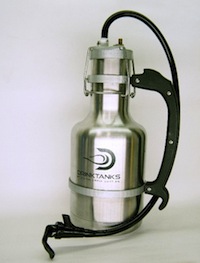 Growlers are great, but they have their drawbacks. The major one is that after you open the growler, the beer quickly loses its carbonation and goes flat.

This growler solves that problem by essentially turning the growler into a mini keg. It has a lid with a built-in tap system. You can dispense the beer from a hosed picnic tap and inject CO2 with a standard CO2 cartridge. This keeps the beer carbonated until the growler is empty.

It’s a very innovative product and they have blown past their fundraising goal of $30,000 by raking in a whopping $176,000 as of this post going up. All signs indicate that they’ll sell a ton of these, even with a $65 price tag which is a good deal higher than the $10-$20 most growlers cost.

Looks like there’s some competition in the growler market! 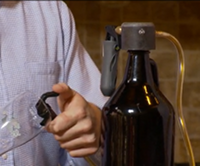 The TapIt Cap is similar to Drink Tanks, except this is a cap and not an entire growler. It fits on the standard threaded growlers that are very popular. Like Drink Tanks, it uses a picnic tap and CO2 cartridge for recharging.

I like the flexibility offered by the TapIt Cap. While not as sexy as the Drink Tanks, you can move it between growlers and it is cheaper (website says under $50). Bonus points for being made in Denver.

They have also exceeded their fundraising goal of $80,000.

Get ready to drool homebrewers – it’s a digital hydrometer. No more wasting ~ 6 oz. of beer to take a hydrometer sample and then squinting to read the gravity. Just send a few drops into it and the digital display will give an accurate readout. 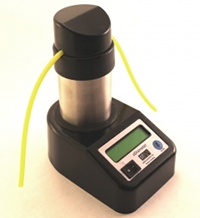 One thing you won’t drool over is the price. $500! I love the concept, but I just don’t see many homebrewers putting down $500 for a digital hydrometer. Personally, taking a gravity reading the old-fashioned way isn’t that big a hassle. Yes I hated reading the tiny lines on the glass hydrometer, but for $20 I picked up a precision hydrometer which solved the problem. With 7 days left and $15,000 of the $35,000 goal funded, it’s going to be a stretch to make it. I hope they stick with the idea and are able to make it cheaper.

A similar product with more bells and whistles is the BeerBug. It sits on top of your fermenter and can send the gravity in real-time to your computer or smart phone. Bad ass, and it looks like it will be available for $200.

Despite all of the beer gadgets, Kickstarter still has a strong presence of new breweries. One in particular that I want to highlight is Modern Times. It stands out as being one of the best brewery Kickstarter campaigns I’ve seen.

Aside from the great video and rewards, what sets it apart is the work that’s already been done in launching the brewery. They have done a ton prior to coming to Kickstarter: they have a rock star team of employees, a location, and fantastic branding. Rather than tweaking their beers as they go, they hired homebrewerer extraordinaire Mike Tonsmeire to develop and brew the test batches. As a consumer, I appreciate this.

I think many breweries put the cart before the horse and come to Kickstarter too early. Personally, I’m more likely to give money to a startup that has already done some heavy lifting and has skin in the game.

I don’t know what role Kickstarter will play a year or two from now. Will it continue to be a major platform for funding breweries, or is it a fad that will disappear? There are already grumblings out there from consumers getting tired of new breweries hitting them up for money. It’s understandable in areas already becoming saturated with breweries, but my guess is that cities or neighborhoods without many craft breweries will still show strong support for new entrants.

Would love to hear your thoughts.