To the passionate craft beer drinker, a new beer release has the all the excitement of a new Hollywood Blockbuster. And just as you can count on the E! channel to bring you movie news, you can count on Adam at BeerNews.org to deliver the latest beer bulletins.

BeerNews is one of the most popular beer sites on the internet. For people like yours truly, it is a daily read for staying in the loop on upcoming beer releases and events. I’m so impressed with Adam’s site that I had to ask him for an interview.

So without further ado, here is Adam, the man behind BeerNews.org:

Why don’t we kick it off by having you tell us a little bit about yourself. Where are you from and what is your beer background?

My name is Adam and I’m in my mid-20s. I’ve bounced around New England a lot over the last few years though I’m considering finally making a move somewhere west in the next 12 months. My first job was as a barback around 16 and I later did an internship with a Bud wholesaler. That is the extent of my “official” ties to the beer world. Thankfully, email and social media have made it easy to connect with people in the industry.

Give us a brief description of your site. What can people expect when they visit?

I provide information about new beers first and foremost, typically before they even come out. It is geared toward true beer geeks that have at least a basic knowledge of what brands to look for on tap and at the store. Over time, I’ve widened coverage a bit to other aspects of the craft beer world though it’s still a hub for learning about new beers above all else.

Where did you get the idea for your site and did you ever think it would get as popular as it has?

I’ve been interested in building on the web since my first Geocities site on the web 10 years ago. During the summer of 2007, as I was finishing up a business degree, I started heavily researching web opportunities in two of my interests: sports and beer. Sports was too overwhelming and beer was a much smaller, manageable niche to grasp. I started my corporate job in early 2008, worked a lot of hours, and needed a creative outlet of some kind so I stopped kicking the tires and started a beer blog. I’m not sure why I decided on “news about new beers” other than there weren’t as many blogs tackling that as there were beer review blogs, general topic beer blogs, etc. I had no clue at the time it would grow like it has and am really grateful that people care so much about what I’m doing.

You report a ton of beer news with remarkable speed. Can you give us a glimpse into how you do it? What is an average day like in the beer news business?

Breweries have certainly made that easier by connecting with us drinkers through social media. Though I still send a lot of emails and make the occasional phone call, I can pull a lot of stuff right from brewery Facebook pages and Twitter accounts nowadays. 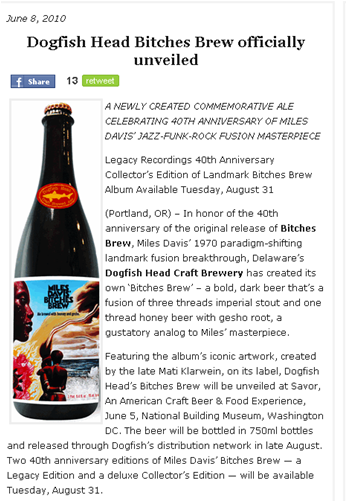 An example of Adam getting the word out

What have been the most popular stories or trends over the past year?

Generally speaking, beer people always rally around news of success of craft beer as an industry because we are underdogs so that’s an ongoing thing year-after-year. We will once again be celebrating amazing results when the Brewers Association releases its mid-year report in August.

The “Extreme” brewing trend has moved more specifically into barrel-aging and collaborations though we’ll definitely see fewer brewery collaborations going forward. With increasing competition, I’d expect them to focus more on their own core brands and product lines. Breweries with only one or two sets of seasonals will add a second or third set on top of those and we’ve seen it already. A few examples: Boulevard Brewing, Goose Island and Heavy Seas. That said, we are seeing breweries leverage their brands into new opportunities. Dogfish Head going into clothing and maple syrup is just an example.

…And it is all about beer cans right now with craft breweries pushing them out in droves for the outdoors season.

Besides the blog portion of your site where you publish beer news, you have a lot of other great resources. What are some of the things visitors can find if they dig a bit deeper?

There is a calendar of new beer releases. I have a page dedicated to buying beer online with links to online beer stores. I published the first (or one of) list of breweries on Twitter (well before Lists became cool on Twitter). There is a message board. I’ve experimented a lot though I haven’t updated any of these other features in over a year. Part of the reason is that I’ve also been working on . . .

You’ve announced that a new version of BeerNews is coming. Very exciting stuff. Tell us about the status of the new site and what will be different.

The bad news is that I’m missing the ‘spring’ release target but that is only because I’m a lot more ambitious with it than I was when I made the announcement four months ago.

Besides the website, where else can people find you online?

How can we support BeerNews?

People support me every day by visiting my site and posting links, etc. I’m very lucky in that regard so I’m not about to ask for anything here. What people should do, instead, is pick another blog/site that they visit regularly and send that person a ‘thank you’ email or leave them a comment on their blog. It’s always rewarding to get emails and comments like that; just a few minutes of your time can make someone’s day.

Thanks for the great interview Adam. If readers have a question or remarks about BeerNews, feel free to drop a comment down below.