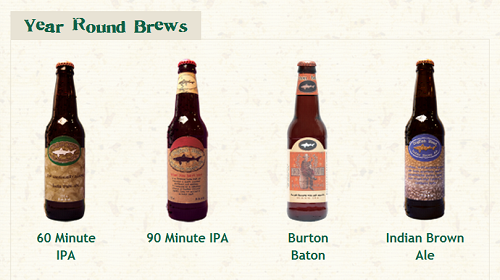 How does a brewery decide what beers to make?

It used to be simpler. You had a handful of year-round beers which almost always included a pale ale, wheat, and porter. Then you had four seasonals where you could be a bit more bold. Maybe a pumpkin beer or a holiday spice brew.

Take a look a present-day beer lineups and you’ll see there is no simple formula for success. In general, portfolios have grown dramatically. Now there are far more categories beyond year-round and seasonal. Some of the new lines you’ll see are:

Then you have the brewery-specific lines like Dogfish Head’s Ancient Ales Series.

To get a better understanding of this “portfolio chaos”, take a look at the table below which shows the beer lineups from the five largest craft breweries in Colorado.

So on one end you have New Belgium which packages and distributes a whopping 23 beers. On the other end you have Oskar Blues with only 7. Both are very successful companies.

We can easily see the products on the shelves, but what we don’t see are the business decisions that go on behind the scenes. “What do we want to make? What will sell? Can we get those ingredients? Do we have the fermenter space? What are the incremental costs of adding a beer?”

But perhaps the biggest question of all is, “Can we get shelf space?”

There are only so many SKUs that can fit on the shelves and the beer aisle is packed as it is. I don’t envy a new brewery trying to get their first beer on the shelves when New Belgium can easily get all 24 of theirs stocked.

Personally I wish breweries would focus on quality over quantity. Specialty/limited/barrel beers are great for tap-rooms but I think breweries are often too-quick to push an unproven beer into 750s. As someone who’s goal is to try as many different beers as possible, I feel like Harry in Gringotts with so many new beers popping up around me.

Ok well if I’ve got such great ideas then what would my ideal beer lineup be? Good question!

There you have it, a 15 beer lineup. Many will argue for double or even triple this amount but like I said above, I prefer quality over quantity and it is very difficult to make 20+ different beers and make them all taste great.

My questions for you: