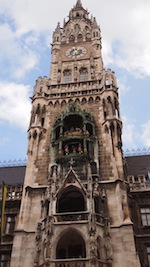 I’m back from Munich, and the trip was incredible. Dr B. (my Dad) and I spent 6 days exploring Munich, Bamberg, and other parts of Bavaria. Let me fill you in on the best part of the trip: the beer.

My thoughts on the Munich beer scene

Beer is part of daily life in Munich. It’s more ingrained into the DNA of Müncheners than it is in Americans. At your meal, you get a beer. On the train, you get a beer. When you’re just hanging out, you get a beer. And they don’t get out of control, either. You won’t find much overt drunkenness (outside of festivals, of course).

There aren’t the same stigmas that we have about drinking beer, especially when it comes to women. Everyone drinks beer. I even saw numerous occasions at beer gardens where parents would pass their glass to their little kids for a few sips. Looking around it was obvious that we were the only ones who thought it was strange.

If you’re looking for beer style diversity and experimentation, this is not the place to find it. C’mon, this is the country of the Reinheitsgebot. However it’s one thing to read about it and another to experience it. At most restaurants the beer menus are clones of each other. There are three types you will certainly find: Helles, Weizen, and Dunkel. If there’s another it’s probably a pilsner, and beyond that a doppelbock may show up. Seasonal specialities appear as well, like Maibock, Oktoberfest, etc.

As an American craft beer drinker you may find this lack of selection rather boring. After all, we’re used to going to a beer bar and having access to a huge range of styles. I wasn’t disappointed though, and I’ll tell you why:

Another great thing is that the default beer is not a light lager. If you just order a “beer” you’ll probably get a Helles. Ok so that is a light lager but it’s not a Bud Light. The Helles you get in Munich is flavorful and delicious. The most “macro” brand there is Löwenbräu, but even they had a doppelbock that was pretty good.

The Hofbräuhaus
You can’t go to Munich without going to the Hofbräuhaus. It’s without a doubt the most famous beer destination in the city. Yes it’s full of tourists, but it’s one of the top beer destinations in the world, and hell, it’s fun. You can’t help but get caught up in the atmosphere, not to mention the beer is excellent. 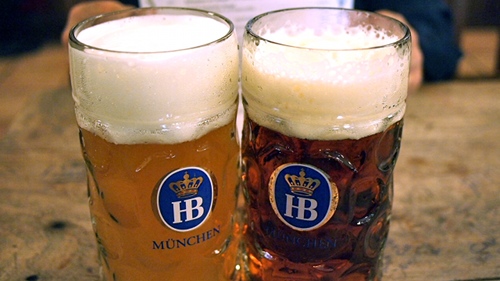 Liters flow freely at the Hofbrauhaus.

Augustiner Bräu
If you’re in Munich Augustiner Großgaststätten is an easy stop so there is no excuse to miss it. It’s between Marienplatz and the Hauptbahnhof (central train station) on the main strip. Augustiner Bräu owns it therefore their beer is on the menu. Edelstoff is their flagship beer and you might have had it in the states. I had it shortly before I left and I gotta say, I wasn’t a huge fan. The fresh version was much better, demonstrating the effects shipping overseas can have on a light beer. 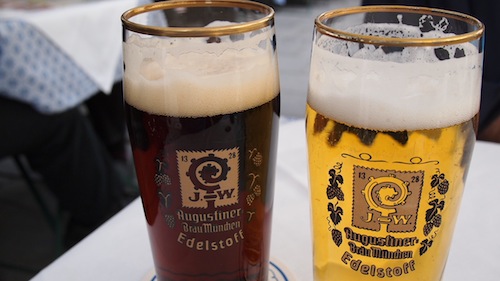 The Dunkel and Helles at Augustiner Brau.

The English Garden
Drinking beer in Munich is about drinking outside, and there’s no better place to do that than the beer gardens in the English Garden, a huge park northeast of the city center. We drank at two beer gardens: Seehaus and Chinesischer Turm (Chinese Tower). The Chinese tower is massive, seating 7,000 people. It has more of a party atmosphere than Seehaus and a traditional brass band was even playing in the tower.

Seehaus is smaller and was our favorite. It’s in a beautiful spot, located on a lake in the park. They serve Paulaner beer and the weizen really hit the spot on a warm day. 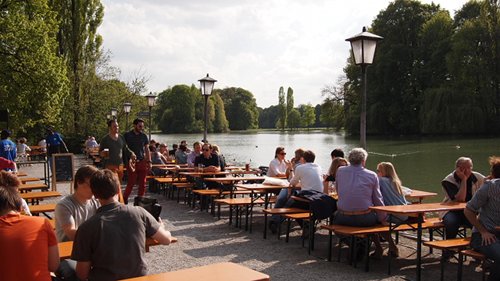 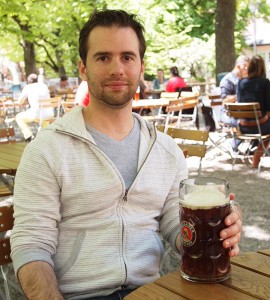 Drinking Salvator at the source. Can't beat that.

After a couple wrong turns, we finally found the Paulaner beer garden. It’s tucked into the “Paulaner Complex” as I’ll call it, because it’s a couple blocks worth of offices, restaurants, and the beer garden. Across the highway is the brewery which Paulaner shares with Hacker Pschorr as they’re owned by the same company.

As is the case with most things in Munich, this beer garden was spotless. Hundreds of picnic tables fill the courtyard which is covered with enough trees to shade every inch. We drank the Salvator which was very good (not as good as a doppelbock I’ll mention below though). I was hoping for a 1/2 liter as it’s a strong beer and I wanted to try something else, but no way jose, only a Maß. I didn’t put up a fight and was feeling pretty good after polishing off a liter of doppelbock.

Andechs
Kloster Andechs is a monastery/brewery located about 45 southwest of Munich via train. It’s an easy day trip from Munich on the S-8 to Herrsching, a beautiful little town on Lake Ammersee. Once there a €2 bus ride took us up the hill to Kloster Andechs. 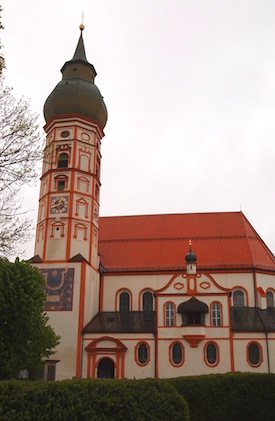 The church on top of the hill at Andechs. 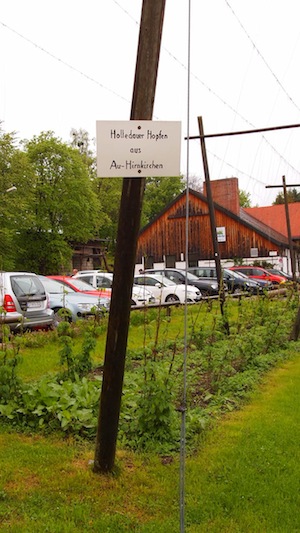 Andechs wins the award for the best beer I sampled on the trip: The Andechser Doppelbock Dunkel. It’s incredibly complex and manages to stay drinkable despite its richness. It’s impossible to say how it compares to other doppelbocks because the context is so important. I often say drinking is more about the context than the beer itself, and that was certainly true at Andechs.

If you’re in Munich and want to try Andechs beer but don’t have time for the trip down there, you’re in luck. They own an excellent restaurant called Andechser Am Dom in central Munich. There is still nothing like drinking the doppelbock from the wooden cask at the brewery, so do whatever you can to get in the trip. 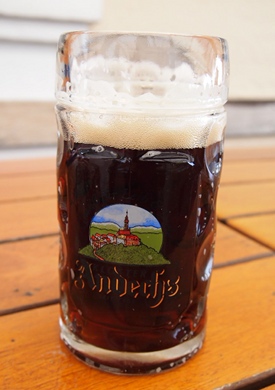 This last picture isn’t beer related but I thought I would throw it in anyways to let you know that if you visit Munich you should check out Neuschwanstein Castle. It’s in a gorgeous part of southern Bavaria in the foothills of the Alps. The castle is wild. There is even an alpine slide next to it that you can ride. I’ll have to post the video of me cruising down it when I get a chance. 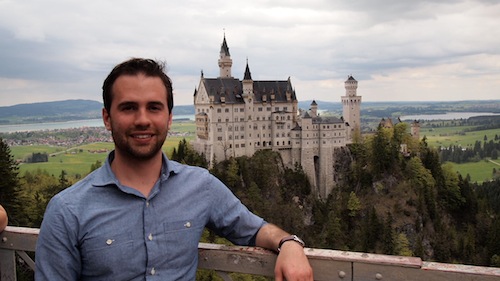 Up next is all about drinking beer in Bamberg, a side trip of our visit to Munich.