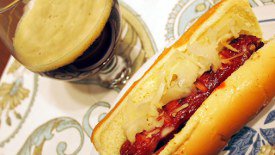 Seriously though…. baseball (my favorite sport) is here and hot dogs are the de facto food of the big leagues.

What’s the ultimate beer to pair with Franks? Lord knows the options are limited at ballparks. Don’t get me started on that. Craft beer at ballparks can save the world yet most stadiums only serve yellow fizzy water (not all though – see the best stadiums for craft beer).

But for us backyard grill masters, however, every beer is on the table.

Now the tough choice of choosing one…

Think about every type of dog out there: Chicago-style, Coney Island, sauerkraut, onions, CHILI!

There’s a different “best” beer for the each of them.

I can’t exactly taste 37 beer & hot dog combinations (or can I…) so I picked my go to dog: Ball Park beef frank with ketchup, spicy German mustard, and sauerkraut.

My beers of choice: 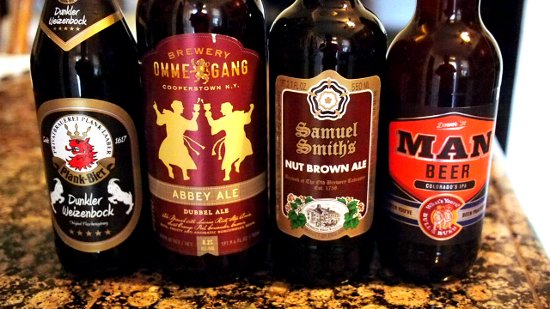 Four great beers, but are they good with a dog?

This is a pretty good diversity of styles. Here’s how they fared…

Weizenbock: My least favorite of the bunch. A good beer on its own but the banana flavors just didn’t jive with the hot dog. The malty, clean lager aspect of it worked well however. Next time I would try a standard bock.

Nut Brown Ale: Solid pairing. The beer was a little overwhelmed by the food though. I think a stronger American-style brown ale (like Upslope’s) would pair better.

IPA: This was a surprisingly good pairing. The dryer finish of this beer compared to the others gave it a leg up. It has a good malt character as well which helped as it complemented the beef.

Dubbel: Winner! This belgian-style beer paired perfectly with the hot dog. I attribute it to the versatility of the beer. It has rich malt flavors as well as a number of spice and fruit flavors from the yeast. This gave the beer the power to pair with not just the hot dog but the condiments as well.

The one thing I enjoyed more about the IPA pairing is that an IPA is more of a summer beer. Either way, dubbel or IPA, you can’t go wrong.