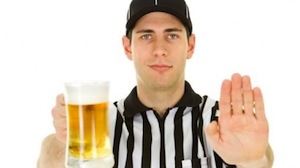 The internet punches have been flying.

It all started last week when BeerScribe’s Andy Crouch called for the death of beer cocktails and collaboration beers.

The beer cocktail debate has actually been going on for quite some time, but Andy certainly fanned the flames:

“In reality, however, beer tends to get lost and overwhelmed as an ingredient in cocktails. The mix of carbonation levels don’t play well together and the small amounts of spirit ingredients, especially those used in smaller measures, often get washed out in the process. The end result is a muddled mess of flavors, often splashing against one another for dominance instead of rowing together in a controlled and directed fashion.”
– Beer Scribe

A number of supporters popped up in the comments. Then came a left hook from a heavyweight. Whether he read Crouch’s piece that day or not (helluva coincidence if not), Charlie Papazian sent this out on Twitter:

But the counter-attacks came sharp and swift.

In the beer cocktail corner

Ezra of The New School beer blog hit back, calling Crouch a big fat idiot (lol…) and condemning his attack on experimentation:

“So you don’t like beer cocktails or brewers teaming up to hash out a new wild experimental collaboration beer. OK, but would you rather go back to a world where your only question was ale or lager? Who knows where we will find the next India Pale Ale if brewers stop experimenting and collaborating.”
– The New School

Then esteemed beer writer Stephen Beaumont tagged himself in and delivered a cold hard dose of logic. He recounts how he responds to people who say “I don’t like beer” when all they’ve tried are mass-produced lagers:

“My response to these self-depriving souls was the same then as it is today. “Beer is a multi-headed beast,” I say, although not necessarily in those exact words, “Just because you don’t like what you have tried thus far needn’t mean that none of it is to your taste.”
– Stephen Beaumont

Where do I stand?

It’s not hard to figure it out considering I’ve done numerous posts on beer cocktails.

I understand the argument against them. “The brewer worked hard to craft the beer – why ruin their intentions?” And “The beer is at its best on its own”.

But here’s the thing. The people who make these arguments are looking at it the wrong way.

Don’t look at beer cocktails from a beer drinker’s perspective, look at them from a cocktail drinker’s perspective. It changes everything. Instead of thinking, “Why would I dump this beer into a mixed drink”, you ask, “What ingredient could I add to make this a mind-blowing cocktail”? And beer is a damn fine ingredient.

“I completely agree about beer cocktails. If it’s already a good beer, it’s a rare case that adding liquor or other ingredients is going to improve it.”

It’s not about improving a beer, it’s about making a better cocktail.

If you’re a die-hard purist beer drinker, I understand where you’re coming from. You’ll probably never like beer cocktails. But if you’re like me and you dabble in wine, spirits, and cocktails, then you appreciate the experimentation and new marriages of flavor.

I think much of the venom comes from the fact that most people haven’t had a really good beer cocktail. Hell, most of the ones I’ve written about (e.g. The black velvet) are fun to make but not exactly delicacies.

Maybe I’m spoiled by living in a city that has beer cocktail competitions in that I’ve had some great ones.

I’d be willing to bet that if Andy could try Ryan’s Cherry Bourbon Milk Stout or Justin Colorado Blackberry Whiskey Sour made with La Folie, he would change his tune.

Which corner are you in?