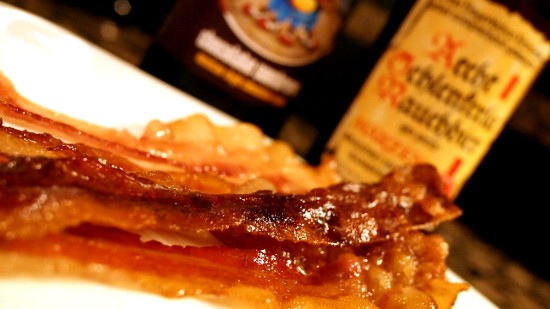 I had never heard those three words put together. My brain can’t perform that type of mental feat. When I first heard about it on this CraftBeer.com article it blew my mind. I had to try it.

The all important question was, “What beer to use?”

The recipe calls for Dogfish Head Chicory Stout. That’s a fine beer but I wanted to try something different, something more bacon-like, something smokey. Maybe you know where I’m going with this…

Rauchbier! If you’re going to combine beer and bacon why not use the mother of all smoked beers, Schlenkerla Marzen.

But I wanted to try something else as well. A beer that’s a little wacky. That beer is Clownshoes Chocolate Sombrero:

“Roasted dark malts plus extra chocolate malts plus ancho chile plus cinnamon plus vanilla extract plus a chocolate loving, beer drinking, Clown Shoes wearing, multi-limbed, gorgeous and glorious Mexican wrestler on the label. That’s the recipe for a Chocolate Sombrero!” 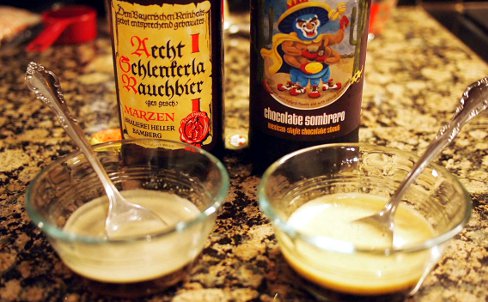 My drugs of choice: Clownshoes Chocolate Sombrero and Schlenkerla Marzen

I followed exact ratios in the recipe but adjusted it for 12 oz of bacon instead of a pound. Six slices got the Rauchbier and six got the Chocolate Sombrero.

How did it turn out?

You’re combining beer, bacon, and brown sugar – how could it be bad?

I had to stop myself from devouring all of them at once. It was tough to choose which I liked more. The Rauchbier brought the bacon to a whole new level of smokey goodness, while the Chocolate Sombrero added something totally unique with its cinnamon and chocolate flavors. I’m calling it a draw.

So now that I’ve totally undone any health benefits I gained during my 30 days of not drinking, it’s nothing but salads for a few days.

Have you ever made beer candied bacon? What beer did you use (or would you use)?