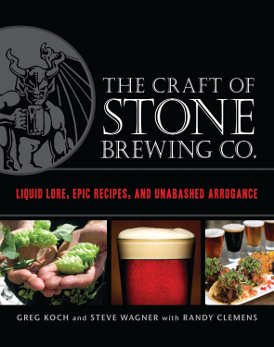 In fact, I’d be surprised if they’ve ever caused a mouth to water in their entire history. If they have, it’s probably because they were made with beer.

Stone Brewing has turned boring Brussels sprouts into something you actually want to eat by what else – infusing them with beer. Stone Pale Ale to be exact.

They serve this dish at their restuarant, Stone World Bistro and Gardens, which I had the pleasuring of visiting on my trip to San Diego last summer.

by Greg Koch, Steve Wagner, and Randy Clemens. It’s a great book, and if you order it I recommend also getting The Brewer’s Apprentice which was also recently released by Stone.

I’ve been given permission to reprint the Brussels sprouts recipe, so here you go:

Set up a steamer with 1 to 2 inches of salted water and bring the water to a rolling boil.

Put the brussels sprouts in the steamer, cover, and cook until slightly tender, about 4 minutes. Drain and immediately transfer the brussels sprouts to a large bowl of ice water to halt the cooking and preserve their bright green color. Let them cool in the ice water for about 1 minute, then drain. Lay them on a clean dish towel and pat dry. Cut them in half vertically, right through the core.

In a large wok or cast-iron skillet, heat the oil over high heat until it begins to shimmer. Turn the heat down to medium. Add the pancetta and cook, stirring occasionally, until it begins to brown. Stir in the garlic and cook until fragrant, about 30 seconds. Turn the heat up to high, add the brussels sprouts, and cook, stirring occasionally, until lightly browned, 4 to 5 minutes.

Add the beer and continue to cook over high heat until the liquid is mostly evaporated. Deglaze the pan by adding the vegetable stock, stirring and scraping up any browned bits that may be affixed to the pan.

Season with salt and pepper to taste. Garnish with the tomato and Parmigiano-Reggiano. Serve immediately.

I had these beautiful pictures of bright green Brussels sprouts shimmering in their beer coating, but of course I accidentally deleted them from my camera.

You probably don’t believe me and think I burnt them to a crisp. Hey, I’m not a great cook, but when it comes to cooking with beer I step up my game.

Anyways, they came out great. Unlike some recipes, you use a lot of beer in this one (a whole bottle) so the pale ale definitely comes through. It does add some bitterness, so I don’t recommend substituting with Ruination.

This recipe certainly made me enjoy Brussels sprouts more. I can’t eat them as a main course (as they suggest), but they’re perfect as a side dish.

Give them a shot. I bet you can get the kids to eat them now.