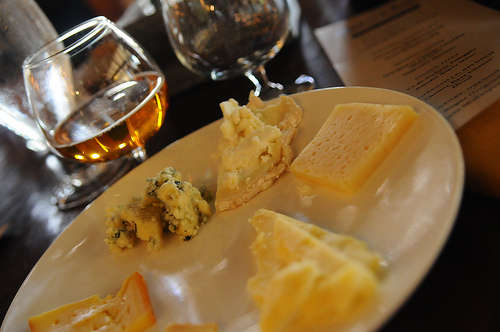 Beer and cheese. A match made in heaven. (Photo: Vissago)

Note: This is the 4th post in a 5-part series called Beer Newbie Missions, a guide on how to like beer.

You always hear about wine and cheese being the classic pairing, but even the wine buffs will agree that beer and cheese is where it’s at.

Brewers have known it for a while

Beer and cheese pairings go back a long time. The Monks knew about their deliciousness, so they produced their own cheese as well as beer. And you’ve seen their skill with beer…

In fact, it is not uncommon for breweries to make cheeses as well. Ever heard of Maytag Blue Cheese? Well Fritz Maytag, the chairman of Maytag farms, is also the owner of the Anchor Brewing Company.

Yes, brewers are well aware of beer and cheese companionship.

So why do beer and cheese pair so well together?

First you have to understand that they are similar industries. At one end you have mass producers making a bland product, and at the other end, you have the craftsman making high-quality, artisanal products.

The quality and diversity of the artisanal beers and cheese make a killer combination.

Um yea, this isn't what I mean by a beer and cheese pairing.

Here’s another zinger you can throw at your vino-sipping friends: beer is carbonated and wine isn’t. Why does this matter? Well cheese is fatty and leaves fat deposits in your mouth. The bubbles from beer act like little scrub brushes and clean your palate, leaving you fresh and ready for the next bite. Wine? No little scrub brushes (except in champagne).

Time to get down to business. I’ll give you 5 different beer and cheese combinations and you pick at least one of them to try.

If you feel like creating your own combination, by all means do so. There are no rock-solid rules with beer and food pairings. Just keep in mind that you’ll enjoy it more if you match intensities. That is, you want to pair a strong cheese with a strong flavored beer. Otherwise, one’s flavor will mask the other.

Remember to use high-quality cheeses. The grocery store may not have them, so you might have to go to a wine (beer) store or specialty shop. Like craft beer, it is worth it.

How’s your palate doing? Beaten down or ready for more? We’re on the second to last mission now so the beers are going to be bold and intense.

The lambic in particular won’t taste like any beer you’ve ever had. Hell, it doesn’t even taste like beer. Give them a fair shot, try a couple different brands, and keep an open mind. I think you are going to find at least one in this bunch that you’ll fall in love with.

Check in down below when you are done with the mission. Let us know how your beer and cheese pairing went, or feel free to ask any questions before you embark.