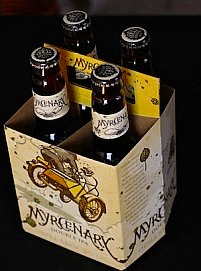 If you’ve been paying attention, there’s a newcomer to the beer aisle.

Next to the 6-packs, bombers, and 750’s, another type of packaging has found room on the shelf: the 4-pack.

I first saw a craft beer 4-pack a few years ago when Dogfish Head released their Festina Peche in the packaging. I’m not sure which brewery originated the 4-pack, but its increased popularity over the past couple years tells me that they are here to stay.

In particular it was the recent commitment by one of my favorite breweries, Odell, to extend their 4-pack line that led me to give this newcomer more thought.

I haven’t seen a thorough discussion of the packaging, so let’s do it here. I’ve conducted some research to get the consumer reaction to 4-packs and even did a Q&A with an Odell Brewery sales rep to get the brewery side.

So let’s get into it.

Fans of the 4-pack claim that it allows them to sample more beers and that for specialty beers it is a preferable packaging to 22oz or 750ml bottles.

Opponents say that they are a bad deal because you are getting less beer than a 6-pack but paying similar prices.

Let’s see what people on Twitter had to say.

Twitter is great for short, straightforward feedback. It’s the perfect tool for getting people’s gut reaction to 4-packs. It also helps that 99% of my followers are beer geeks – just the people I want to hear from. I put this question out on Twitter:

Poll: Do you like 4 packs of beer? Why or why not? 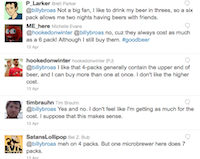 In a matter of minutes I had 23 responses. The results were mostly positive, though most people added the condition that it depended on the beer. More specifically, they feel that if the beer is higher in alcohol and uses more expensive ingredients then it justifies the price.

So overall the craft beer community seems to like 4-packs, but I was also interested in getting the brewer’s perspective. This is a business decision after all, and I wanted to know what factors go in to making that decision.

I met Derek Struble of Odell Brewing at one of our #BrewDEN meetups. I shot him a few questions about 4-packs and he responded with very thorough comments.

We choose 4 packs for some of our more recent beer releases, not instead of, but in addition to our already successful 6 pack line-up. We felt beers like Myrcenary Double IPA (9.3 ABV) and Double Pilsner (8.1 ABV) were truly unique enough, and made with the utmost premium ingredients in large quantities, to garner a smaller package size. We understand that for a brewery of our size, with limited brewing capacity, we have to be careful with the volume we do with certain beer styles. We started researching the successful rate of sale with other packaging well over a year ago for the kinds of beers we were planning to brew, i.e. 22 oz, 750ml, 6 packs, and 4 packs. After much deliberation we realized that 4 packs were the packaging that would best highlight the world-class beers we were planning. We didn’t feel 22oz pulled through as well, these beers were going to be available longer than our current Single Serve 750ml line-up (Myrcenary having year-round availability), and 6-packs were not feasible for the cost of goods going into each batch. 4 packs were clearly the appropriate packaging for our new, higher ABV line-up of unique beers. We received a lot of feedback from beer fans commending us for planning and implementing a 4 pack line-up. It allows the craft drinker to sample truly innovative beers in smaller quantities and know that he or she is receiving the utmost in craft beer quality.

2. How does Odell decide which beers are good candidates for a 4 pack vs. other packaging (750ml, 6-pack, etc.)?
We choose the packaging based on a variety of reasons, availability of ingredients being one of the biggest. When we are brewing/packaging one of our 750ml Single Serve series of beers (Avant Peche, Deconstruction, Saboteur, Friek), we are constrained by the amount of the necessary ingredients available to us. Along with ingredients, we barrel age many of our Single Serve series and we only have so many barrels at our disposal. Because of these reasons, we provide the lower volume packaging of this series in the more expensive, smaller packaging size of 750ml.

The 4 pack was a different decision all together. We knew we would readily be able to procure the necessary ingredients for these beers, but we also knew the ingredients would be expensive. We wanted to create a truly unique and innovative style of Double IPA, and to do this we utilize seven varieties of aggressive American hops. We also use twice as many hops per barrel as we do in our 6 pack Odell IPA, for example. This venture into 4 packs was definitely a brewery decision, and we all felt comfortable in this packaging being the most appropriate way to highlight Myrcenary. Our plan is to offset Myrcenary with two rotating annual beers, which may change from year to year. Currently Double Pilsner is on the shelf next to Myrcenary, and later this year Mountain Standard Double Black IPA will replace Double Pilsner to join Myrcenary. We feel like this is the best way to showcase some of our beers, and we are proud to provide these eclectic beers in the most appropriate, cost-efficient manner. Not to mention, we just feel like 4 packs are a cool way to drink beer!

3. What has been the consumer response to 4 packs and will we see more of them from Odell in the future?

The response has been overwhelmingly positive and yes, we do plan to continue the 4 pack line. We know that in order to gain the respect of the craft drinker, regardless of the package, the beer inside has to be stellar. We have consistently been pushing the envelope on craft beer styles and creating one-of-a-kind beers, I think this reliability has allowed us to have a positive following with our smaller volume releases. Obviously, if we were brewing mediocre, uninspired beers we would not being having this conversation, because the packaging would not matter. Everything starts with the beer – we’re not creating an image or a fad, we are consciously creating innovative beers and packaging them in the most appropriate manner according to OBC. There will always be drinkers who do not understand why we price the beer in the manner we do, which is why it is our job as representatives of the craft brewing industry to educate these drinkers. Often, upon clarification of the passion and ingenuity that goes into beers like Myrcenary or Double Pilsner, the drinker is more knowledgeable and understanding of the price point on the package. We will continue to provide world-class beers, and this type of innovation comes with a cost. We are very proud of our family of beers, regardless of the packaging, and will continue to do what we feel is right for our brewery, not necessarily what is popular.

Big thanks to Derek for the great explanations and for helping out with this post.

It’s my belief that the customer reaction to the 4-pack is in part influenced by the prior packing of the beer. With Myrcenary, the beer was initially released in 4-packs so there was no reaction to “the way things used to be”, but many 4-pack offerings once had different packaging.

Let me offer a couple examples…

The Odell Mountain Standard Black IPA is offered in 750ml bottles but will soon be released in 4-packs. It’s my guess, and my experience in talking to people, that this will be a welcomed change. I’m going to use the Six-Pack Equivalent Calculator to compare prices. It tells you what the given package of beer would cost if it were put into a six-pack and priced on the same per ounce basis. It rocks.

Here’s an example comparing the Mountain Standard. I got the 750ml price from a local beer store and I’m just guessing that the 4-pack price will be similar to Myrcenary:

So with the 4-pack you’re getting more beer (48 oz vs. 25 oz) for less money on both an absolute and per ounce basis – who’s going to argue with that? You also have to look at the quantity in terms of servings, not just ounces. People think in terms of servings and in this case they get to enjoy the beer four times instead of once. A 48 oz bottle wouldn’t have the same effect as a 4-pack, even if it were the same price. This is important for the next comparison.

Going from a 6-pack to a 4-pack is a whole different story. In 2010 Green Flash went from selling their West Coast IPA in 6-packs to 4-packs. Here’s a look at the new packaging and pricing in a California market:

This Beer Advocate thread reflects the ensuing backlash. Some of the comments I found interesting are:

The last comment is particularly interesting because this person works at a beer store.

Final Thoughts and My Opinion

Overall it seems 4-packs are a positive thing for craft beer, both from the consumer and brewery perspective. The key is that it depends on the beer. We saw this both in the Twitter survey and in Derek’s response, “4 packs were clearly the appropriate packaging for our new, higher ABV line-up of unique beers.”

Put a 5% American Wheat in a 4-pack and charge $10 and it won’t work. Consumers won’t accept that.

Another no-no is changing the packing from a 6-pack to a 4-pack and only making a minor reduction in price. When you condition the consumer to a quantity and price and then suddenly give them less for more, it’s a recipe for trouble. We saw this with Green Flash.

A great high ABV beer made with unique and expensive ingredients, on the other hand, justifies the expense of the 4-pack in the eyes of the beer consumer.

Personally I love 4-packs. I don’t hide the fact the 750’s bug me. They’re very expensive and the serving size is inconvenient. 750ml of a 11% beer is too much when you’re the only one drinking it.

When I heard that Odell will release their Mountain Standard in 4-packs I was ecstatic. Now I can have a smaller serving multiple times, instead of struggling to finish a 750 in one sitting. Mycernary is a similarly amazing beer and it’s rare to see such a good double IPA in 12 oz. bottles.

So bring on the 4-packs I say, as long as the beer is right. I have no problem paying for quality.

But what do you think?