Battle of the Hefeweizens 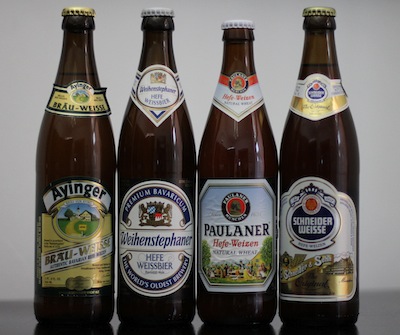 America excels in many areas of brewing, but when it comes to wheat beers, Germany owns us.

I’m specifically talking about hefeweizens. Yes, we have American wheats, but given that the yeast is one of the main flavoring components, our versions taste empty. Domestic attempts at the real thing have fallen short, in my experience.

I wanted to find the best German hefeweizen, so I put 4 locally available options head to head. These are some of the most well known German hefeweizens, so you’ve probably slugged at least a couple of them. We’ll see if my favorites are the same as yours.

The oldest active brewery in the world, Weihenstephaner is located in the town of Freising and can trace its brewing history back to 1040. It is now owned by the State of Bavaria and also operates as one of the top brewing schools in the world through a partnership with the Technical University of Munich. They make a handful of beers, the most notable being the hefeweissbier which I tried in this battle. I recently tried their Korbinian doppelbock and that may actually be a better beer, but that’s another post.

This is a Munich brewery established in 1634 by the Paulaner Monks. It is now owned by a conglomerate, Brau Holding International, through a joint venture with Heineken. Though their hefeweizen is famous, they’re greatest claim to fame is creating the world’s first doppelbock – Salvator. This beer is the liquid bread that the monks drank during Lent, and that so many breweries then emulated.

By the way, you have to check out their kooky website.

Guess where Ayinger is located? Yup – Aying, Germany. It’s outside of Munich in the foothills of the Alps. They make a wide range of beers, the most well known being their Celebrator Doppelbock. You know, the one with the little toy goat attached to it.

From my experience, their Brau-Weisse is top notch.

Tasting notes: Light, hazy yellow. Lemons, cloves, and bananas. Zesty. A touch of wheat tartness up front and hop bitterness in the finish.

The Schnieder family has 6 generations of brewers. They started brewing in Munich but after WWII moved their main wheat beer operations Kelheim.

Schneider Weisse (their hefeweizen) and their Aventus doppelbock are their most well known beers.

I first eliminated two beers – Paulaner and Schneider Weisse. It was tough to kick out Paulaner, but Schneider was the clear loser in the group. It’s too dark in my opinion and is missing the characteristic yeast qualities for the style. Plus it was a bit flabby.

So it was between Weihenstephaner and Ayinger. I ended up favoring Weihenstephaner, but not by much. It has a little bit of a smoother finish and the yeast flavors are just outstanding. These two are actually the most similar beers in the bunch.

If I had to rank them, it would go:

One thing to keep in mind here is that all of these beers traveled from Germany and most beers, especially wheat beers, are best drunk fresh. If I would have had each of these fresh at the brewery, the rankings could be completely different.

What are your favorite German Hefeweizens?