Barrel Tips from the Pros at Firestone Walker Barrelworks

Welcome to part two of my conversation with Jeffers Richardson and Jim Crooks of Firestone-Walker Barrelworks (Read Part 1 here).

In this post we discuss picking the right barrel and how to prepare it for use. As you will read, the barrel is just as important (and maybe more) as the wort or beer going into it. 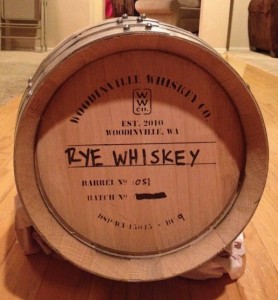 Robert – When you get a barrel in, what’s the first thing you do?

Jim – Smell them. Bung them if they’re un-­bung. I usually don’t accept stuff that doesn’t have a bung in it. The idea is, try to eliminate all the factors that could be issues down the line. Just cleanliness on the outside, take a look at it. Does it look like it’s going to hold? Is it cracked anywhere? You pick the best ones. I’ll reject something that smells. (bad)

Jeffers – Wood boring bugs. A winery may temporarily store barrels outside. If there’s a bug beetle, it’ll land on it. If those things wake up.

Jim – When I get a call I’m always asking them, “When were they emptied? Where are they stored? Was there already solution in them?  Have they been sulfured?” Are they stored inside or are they stored outside? You want stuff that’s immediately emptied, it’s sulfured, stored inside in generally a cool environment. When the barrel comes in obviously you can smell it right away and know how it was treated.

Robert – Do you go through a special cleaning process, no matter what kind of barrel it is?

Jim – We’ll hot clean it with a high pressure, 170 degree water.  If the barrels smell really good, I will fill them. If the barrels have sat in our warehouse for 2 or 3 months between the last cleaning, we’ll fill them with a 2:1 sodium metabisulfite and citric acid solution. That helps the swelling as well because if they’ll sit longer than 3 or 4 weeks, the staves will shrink on you and then it’s a lot of work to get the rings tighten the barrel.  This solution gets the pH to 3.4 or 3.2. That’s what the wineries use, just for storing solution.  Anything higher than that in the sanitizing solution, you’re going to have issues getting that out of the barrel. If the barrel looks like it can really use more help, and say if it’s a fouder or something I can’t afford to get rid of, we’ll use sodium percarbonate which is pretty caustic, aggressive cleaning solution. We’ll spin barrels with that, but that will actually take wood off. It’s an alkaline cleaner. Then you have to neutralize that citric acid. Normally after that I’ll rinse it with hot water, then bringing metabisulfite again, empty that, purge it out, dry it for a day, and then smell it. If you get that acidic smell after that, it’s good riddance to that barrel.

Jeffers – Sodium (metabisulfite and citric acid) doesn’t actually kill.  It just inhibits. Trying to sanitize a barrel is not an easy task.

Robert – When you’re bringing a barrel in that requires the extra cleaning, whether it’s a wine or sprit, are you really getting the flavor or what was in the barrel?

Jim – The aroma is not going to go away after even that style of cleaning.  With metabisulfite and hot water you’re still going to get the flavors of the barrel. Say wine’s been in there for 3 or 4 years. It’s penetrated. I spun them with metabisulfite. I’d spun them with hot water. Still a year later, it’s coming out with tons of characteristics. 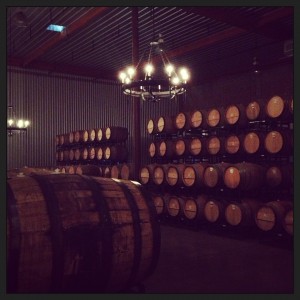 Robert – Some homebrewers who are able to get a barrel, might put some hot water in it,  rinse it out, make sure it’s no sediment in there.  If it looks like it’s going to hold liquid, they will fill it and hope the magic happens.

Jeffers – The first thing is smell.  If you smell vinegar, good luck. If something comes in and doesn’t seem right or doesn’t look right, and it doesn’t smell right, address it. Because down the line you’re like, “My notes say that this has acetic acid aroma coming out of it”.  Now the beer doesn’t taste right and I just wasted $600 worth of beer and 12 months.

Robert – What about the concept “If something is not right with a batch or is just not a great beer, you put it in the barrel and automatically it will taste so much better than it was?

Jim – No. A local home brewer brought a barrel in here.  I smelled it and I was like, “That just doesn’t smell right to me.” I treated it like I would any other barrel and handed it back to him.  I said, “The best thing to do here is not put something you’re going to give a shit about. Put something like Russian Imperial Stout in there so it can take a heavy hit of whatever, oak, that fresh new scored oak, and flavors, and just season  that barrel  first. Then if you’re happy with that beer, then move on to something like SLOambic or Lambic style beer or something that’s lighter in flavor.” You’re going to pick up a lot of oak character from fresh barrels.

Jeffers – It’s going to fly out of the glass.

Jim – Yeah.  Especially use heavy beer, put it in that barrel, and kill anything else in there because I use it to kill that stuff too.

Jeffers – Then also with the higher alcohol you will extract more material.

Jim – Basically it’s conditioning or seasoning. Then he did 2 or 3 of those big beers.  Now he’s doing Lambic and he loves the results.  He’s pretty happy about that.

Jeffers – This is something that I do when I’m talking to people about barrels in general. Because people say, “I don’t have a barrel, can I just get this by using chips?”  I always tell people, “There’s a difference between extraction and maturation. “Extraction is just that, you’re just pulling the wood components out of the wood. Some are positive upfront, like the wood sugars and vanilla.  A lot of them have to mature or oxidize over time to create these really nice flavors. 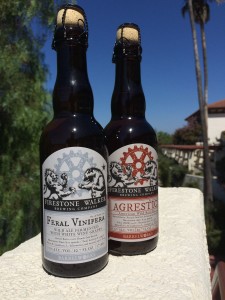 Robert – Do you think you can successfully take a whiskey barrel and actually make it neutral enough where you don’t get any whiskey elements out of it?

Jim – Yeah, depending on the beer that you’re putting in there.

Jeffers – And the number of uses.

Jim – It would take a huge hit on the second use.

Robert – If you used a barrel 5 times, and then put Opal in it, will you still pick up a little bit of that whiskey element to it?

Robert – That little bit of caramel.

Jim – For sure.  Depending on how long you put it in there of course, it will change extraction time. If you keep it cold and shorten the period of contact time, you’re not going to get as much. If you keep things cold, especially you’re not going to get the booziness as well. Many years ago we kept the barrels in Paso, at 40 degrees. Then at a certain point we realized we’re going to have to turn over those barrels a little bit quicker so we upped it to 50. A lot of times we have started seeing people that were producing these beers in a matter of 3 to 6 months.  They started picking up a lot of that soy sauce-­‐y, kind of warmer volatiles

Jeffers – The American oak, can really be in your face.

Jim – Firestone always would be on the side of less extraction and not as big and boozy as some other people’s products.

Jeffers – You can see that when you taste barrel aged beer.  The ones that are well made, there’s a balance complexity. They’re boozy but there’s a lot of other things going on.  There’s other ones that sometimes just taste like somebody dropped a whiskey depth charge in.

Final thoughts on the barrel

Jim – I’m teaching people that are selling these barrels what my standards are. I’ve gone out with them and shown them what I’m looking for in smells.  These are layman people from different industries. Now they know. They’re showing up at wineries and calling people on their bluff. “This is a food product. You can’t just leave it rotting outside. You can’t drive it down the street without a bung in it. It’s a food product.” People should be treating barrels like food products. You’re teaching winemakers how to store their stuff and how to pass off their barrels and teaching people that are buying those barrels, what to look for, the signs of good practices. Also we talk to a lot of homebrewers about barrels and if there’s any question then address it right away before you put beer in there.