Brews or beers are made from a variety of grains, so each has a different taste and different properties. Corn produces a smooth, sweet beer. Oats add creaminess and fullness to beers. Rice adds snappiness to a beer’s flavor, while rye adds spiciness and complexity to a brew. Wheat creates a smooth, full-bodied brew. However, barley is the most common grain used in brews. Barley is popular as a brewing grain because of its flavor, nutritional properties and benefits to the environment. 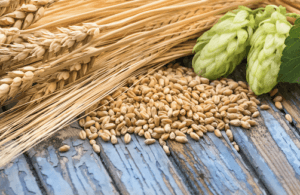 Barley is a grain that is in the grass family. Barley has many uses as livestock feed, cereal grain, and brewing beer. It is used in feed for ruminants because of its high protein content and is highly digestible. This translates into an efficient feed source to include in rations for livestock producers. Most of the barley produced, however, is used in the brewing industry for making beer. When used in human foods, barley has a lower gluten content as compared to its counterparts.

Barley as a whole grain is considered a healthy food. It is a low-fat, high-carbohydrate grain. It has a protein content of about 10 percent and is high in soluble fiber. Barley is high in potassium and low in sodium. This grain contains certain B vitamins and vitamin E. Minerals found in barley are iron, zinc, magnesium, selenium, and copper. Barley is a versatile grain that can be found in many foods. Consumers can find barley in certain soups, stews, bread, noodles, grits, cereals, beer, and whiskey.

Barley and the Environment

Barley is an environmentally friendly grain crop. It is a hardy crop which is inexpensive to produce and easy to grow. The spring crop grows best in environments which are cool and dry. This grain crop is excellent for erosion control, suppressing weeds and serving as topsoil. The roots of barley can reach lengths of over six feet, which is what makes it an excellent plant for erosion control. It has a short growth cycle which makes it a perfect crop for producers who are in between rotations and need an easy to maintain crop which will also protect the soil.

Barley recycles nutrients, especially nitrogen, and improves potassium and phosphorus counts. This crop works as a weed suppressor by absorbing moisture in the soil quickly before competing weeds have the chance to. It will also smother out weeds while releasing chemicals that help in the suppression.

Barley can improve the composition of the soil and acts to decrease plant pests which include invasive and damaging aphids, armyworms and leafhoppers. 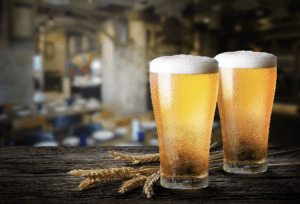 The process of Turning Barley into Brew

Brewing beer is a true art form. Brewmasters take great pride in perfecting their craft and producing the best tasting brews possible. The first step to brewing beer is to steep the barley grains in water. They steep in water until they germinate.

The second step is to dry the grains, which stops the germination process. After the barley grains are completely dried, they are cracked. The purpose of cracking the grain is to retrieve the germinated seed.

The germinated seed component of dried barley is called malt. Malt is the part of the grain which is most commonly used in beers.

After the dried, germinated seed has been harvested, the malt is then soaked in warm water. Soaking barley malt in warm water will activate enzymes. These enzymes convert the grain’s carbohydrates into simple sugars.

The liquid is then drained off and boiled with hops that act as a flavor additive and a preservative. Once cooled, yeast is added which causes fermentation by turning sugar into alcohol. Fermentation can take up to 10 days. After fermentation, the yeast cells are separated out, just leaving the brew. 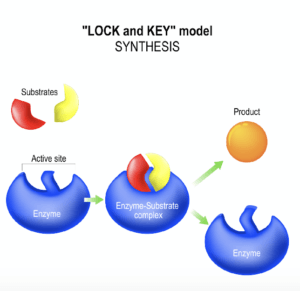 Enzymes are a catalyst which speeds up chemical reactions by lowering the energy requirement for the reaction to take place. An enzyme is made of protein and contains active sites to which substrates adhere to. Once the substrate is bound to the active site, the reaction begins and a product is the result.

Enzymes are ever present and play an important role in barley brews. B-amylase, exo-peptidase, and carboxy-peptidase are three enzymes which are present in the seed portion of barley during the steeping process. These enzymes remain dormant until the malting process, at which point they are activated.

During malting, four different enzymes are created. These are pentosanases, a-amylase, B-glucanase, and end-proteases. The increased moisture content activates these four enzymes. Once the malt is dried, the enzymes hibernate. They are not destroyed–just rendered inactive until later in the brewing process.

These enzymes play a critical role in the overall physical properties of the brew. For instance, B-glucanase breaks down cell walls. Brewmasters want as much of the cell walls broken down as possible to prevent brews which are too thick.

Conventional brewing of barley means producing brew in a traditional manner without the addition of enzymes. Enzyme-assisted brewing means the brewmaster adds enzymes during the brewing process.

B-glucanase is the most commonly added enzyme in the brewing process. This is due to its importance of breaking down cell walls and its ability to reduce the viscosity of the wort, making it easier to filter later in the process.

Amylases are commonly added during the brewing process, as are enzyme products which help further reduce viscosity, run-off times and improve head retention. Amyloglucosidase is an enzyme which facilitates the production of glucose. This enzyme is useful in brews which are either low-carbohydrate brews or high-alcohol brews.

Brewmasters do not utilize enzymes in the brewing phase. They can also be added after the completion of fermentation. Enzymes in this phase are used to increase the shelf-life of the product and prevent chill-haze. These enzymes are proteolytic-based.

Enzyme Products as the Future of the Brewing Industry

As brewmasters constantly look for products which will help increase the efficiency of production while continuing to produce high-quality beer, they are also looking for ways to have a positive impact on the environment. Companies specializing in high-quality enzyme products understand the needs of the consumers and are continuing to innovate and develop the best products for the brewing industry.

Morgan is a writer and beer aficionado from Dallas, Texas. He has over 5 years of experience in homebrewing and 10+ years of bartender experience. In his spare time, he enjoys creating his own recipes for his friends and family to enjoy. His passion for brewing stems back four generations to his family’s deep roots in the brewing industry.