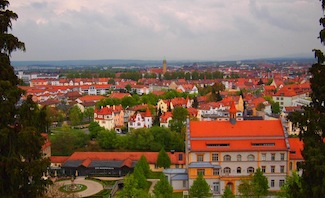 As a side trip of my beer adventure in Munich I headed up to Bamberg. If you’re in Munich, seriously consider the trip. It’s a bit of a hike but totally worth it. Bamberg is tiny: only 21 square miles with a population of 70,000. NFL stadiums hold more than that. Yet this quiet Bavarian town is home to an astonishing nine breweries.

Munich is a laid back city in itself but Bamberg is even more so. The rivers that run though it seem to have a calming effect. The architecture is beautiful and there are seven hills dotted with churches and castles.

It’s also a younger and hipper city than I expected. At night the teens hang out on the many bridges the span the rivers. I was impressed to see that they were drinking fine German beer out of swing-top bottles. That sure isn’t what we drank at that age…

Getting to Bamberg from Munich

As this was a heavy beer drinking trip, driving was out. That left the train. I was shocked at how expensive the super fast ICE train was – €120 per person for a round trip ticket. If you’re willing to go down a tier a take the regional train then it becomes €22 round trip if you buy the Bayern Ticket. You can add another traveler for only €4, so it was only €26 for my Dad and I. Yea, we went with that option.

The regional train takes 3-3.5 hours depending on when your train leaves. There is a short stop in Nuremberg which helps break up the journey. You can do a day trip but you’ll be getting up very early and getting back very late. We wanted to take our time so we spent the night. I didn’t expect to find a Best Western in Bamberg but sure enough there is one and it’s fantastic. It’s also walkable from the train station.

We managed to check out four breweries in Bamberg:

Brauerei Fässla
I call Fässla the gnome brewery. They are all over the place: on the walls, the glassware, the website. It’s pretty funny.

The little guys must work some magic on the beer though. I found the Pils especially snappy and refreshing. The Dunkel also hit the spot with its fresh bready and nutty character. The place has guest rooms upstairs so you could stay there on your visit. It would sure make breakfast beers easy.

Brauerei Spezial
You gotta’ love how close everything is in Bamberg. Spezial is directly across the street from Fässla and just 50 yards down from our hotel.

Fässla was great but we were in Bamberg and needed some rauchbier asap, which Fässla didn’t provide. Fortunately Spezial scratched the itch. It’s more dimly lit and quieter than Fässla. It seemed like more of a regulars’ place. The weissbier was especially interesting. It’s a solid hefeweizen base beer and a touch of smoke adds in a great complexity. The marzen is your more typical smoked beer with the requisite bacon and BBQ qualities. Then there is the mystery of the beer (or beer concoction) that the waitress was heating up with an electric heating element. Still haven’t figured that one out. 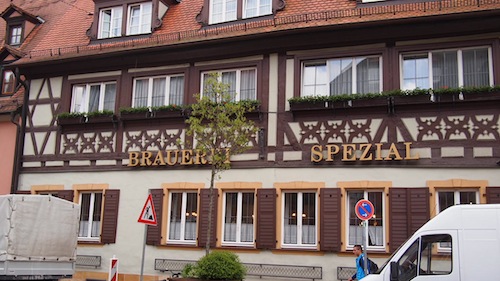 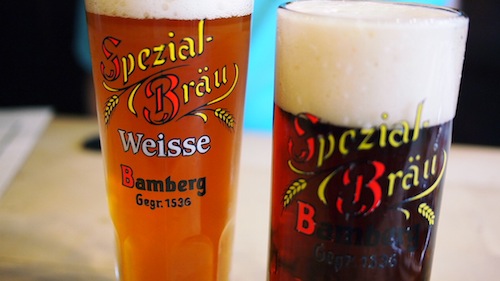 Weissbier and Marzen from Spezial 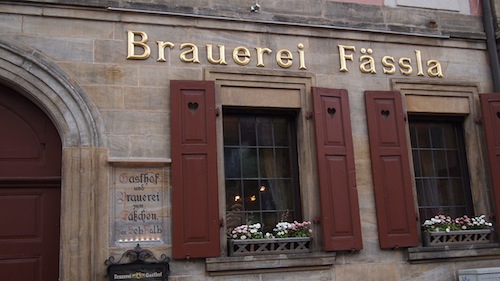 The Fässla Brewery in Bamberg.

Schlenkerla
Finally, Schlenkerla! This was the number one place I wanted to visit, especially after my Schlenkerla Tasting just before the trip.

You know when you’ve arrived because it’s got the most tourists. There is a beer garden in the back which was full so we found a spot inside. Like the other breweries it’s small, wooded, and dark inside. There are rooms seemingly tucked away everywhere.

They must have been short on beer because they were only pouring the Marzen and even that came from bottles. I was a little disappointed their other brews weren’t available, but I couldn’t complain much because the Marzen was fantastic. You could definitely tell a difference in freshness between it and the beer we get in the States. The food was top-notch as well. 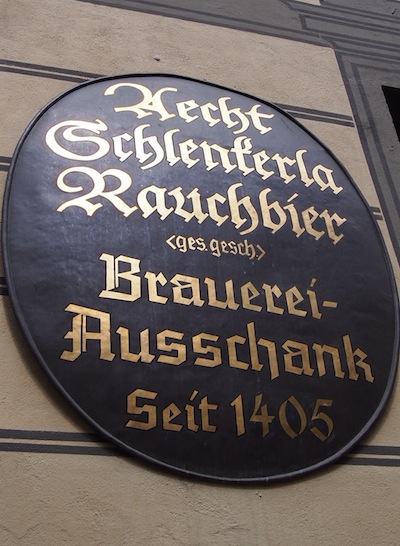 Ambrausianum
This was the last brewery we visited and the most unique of the three. It’s also the only brew pub in the city.

Ambrausianum a more modern establishment. Even, dare I say, more American looking. Two bright copper tanks anchor the middle of the pub. There is a small patio area out front but it’s doesn’t have a large beer garden.

I was happy to see they had a sampler (which they call the “Bierprobe” – love it) so I went with that. Between the Dunkel, Weizen, and Helles, my favorite was the Weizen. The Dunkel wasn’t quite Dunkel-y enough (you can see how light it is in the picture) for me. The Helles was also very good and they sold bottles of that so I took one home. The food was also good and I had my first and only salad in Germany. There isn’t much green on German menus so when you see something healthy, take advantage.

Definitely stop at Ambrausianum if you visit Bamberg. 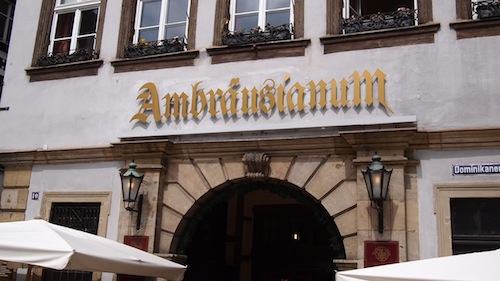 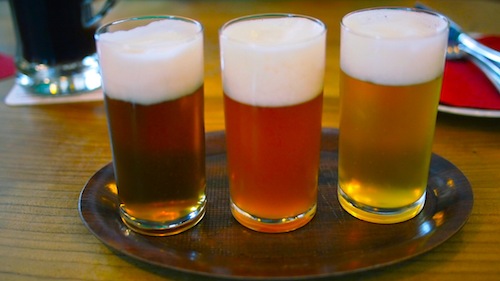 A couple of places I wanted to visit but didn’t get to were Weyermann Malting and the Franconian Brewery Museum. Weyermann only does tours for individuals once per week and the museum wasn’t open the day we were there. It wasn’t a huge loss though, and the walk up to Michaelsberg Abbey where the museum is located was worth it. The views from up there are spectacular and the first picture in this post was taken from Michaelsberg.

Just don’t have too much beer in your belly when you walk up that damn hill.

So that’s Bamberg. I had a lot of internal debate about whether or not I wanted to dedicate a couple of days of the trip to visiting it. In the end I’m extremely glad I did as it’s a truly world-class beer destination.