As with any other industry, homebrewing continues to evolve. Take one look at the growing amount of devices on the market targeting homebrewers and you can see it happening.

It started small, with kettles designed specifically for homebrewers. They focused on boiling wort or mashing grain. Then came tools to help you better lay out a RIMS or HERMS installation. The Blichmann Tower of Power, for example, brought the possibility of RIMS to those who didn’t want to build their own from the ground up.

Fast forward to the present and you can see a big revolution that has gotten many up in arms within the community. Names like PicoBrew, the Grainfather, and now the freshly announced Vessi have been popping up as new “tools” for the hobby. These are merely a few examples of the growing world of semi-auto to auto brewing/fermenting equipment. And it has proven to be rather polarizing.

What are these polarizing systems? Let’s take a look at just a few of the offerings available. 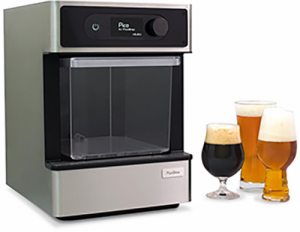 Picobrew burst on the scene with the Zymatic. This larger system was more intended for professional use, and the price point puts it out of reach of most homebrewers.

However, then they brought a more reachable system to the fore with the Pico! 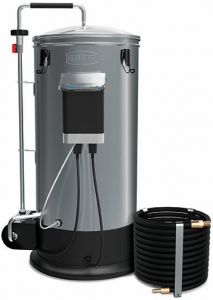 Coming in at +$900, the Grainfather is an all-in-one brewing system with an 8 US gallon capacity, and can handle up to a 20-pound grain bill.

It includes a counterflow chiller, pumps to circulate wort and aid with cooling.

Expensive, but you get what you pay for – right? 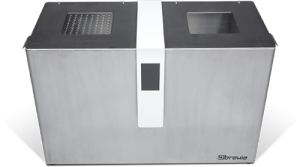 The Brewie is a fully automated brewing machine in a small package. It can brew up to 20 liters of beer per cycle.

Fermentation happens outside of this particular system. However, it touts an easy process for beginners or a hands-on tweaking of the brewing process for experts.

The Haters
As you look at posts regarding these types of systems (granted, not all equipment is created equal, and not all equipment does the same thing or the same way), you are hit with strong emotional reactions. Take a look at any Facebook post about the Picobrew (as just one example) and you’ll see that post flooded with negative comments:

The Fans
On the flip side of the conversation, people are showing their desire for these setups by funding the road to production:

Judging by the massive amount of funding these setups have received, it’s clear there is demand for single vessel breweries. Even at their lofty prices.

There is a group in one corner that says I want to get there as easy as possible, while the other says, “No! Brewing is an art! If you automate brewing, then the machines win!”

But is it that simple? The easy camp can point to complex aspects of brewing, say sugar extraction in the mashing and sparging process for example. They may justify that the best way to ensure a great extraction percentage is to dial the process in as only a computer can. Or, perhaps they just lack the time in their lives to devote a full day to brewing.

The other camp looks at homebrewing with more romance. The journey is just as important as the destination. If you automate the brewing process, you take out the most important part of beer: heart.

Rather than argue for one side or the other, let me share a scenario…

I have a single-hop IPA that I enjoy every time I make it. It’s a recipe I have brewed several times and have finished tweaking everything (at least for now). In short, it’s a beer I enjoy, and I don’t play with it. However, I don’t have a lot of time to brew. When I do, I like to try a new recipe my brew partner and I have been working on. The IPA takes a back seat.

But man, it sure would be nice to have my fresh, single-hop IPA on tap whenever I want it. I could brew two gallons of it in my automated countertop brewery, while at the same time, I brew ten gallons of a blackberry-hibiscus saison on our RIMS setup.

It would be so convenient to come home from work, throw some ingredients into the brew machine, and have a fresh hefeweizen ready to go a week and a half later. And because of the automation, I could brew while taking care of home duties.

I think the automated brewing equipment is a natural evolution of the industry. There’s a place for it, but it’s not for everyone. I’m not giving up my RIMS for one of these, but it might be nice to have some fresh homebrew around a gallon or two at a time. Or take advantage of the consistency to really dial in a recipe.

*Update: Recently the BeerDriod has made a great impression with its early fans. See the full review on it here.

What about you? Let us know in the comments below.

Billy Ellison: (other Billy, Wd, etc.) is a transplanted Southern boy currently living in Southwest Missouri. Since being exposed to the homebrewing community, he has been building his passion for the full variety of beer styles. Not one to be tied down to one style, he continues to branch out in brewing styles, making each recipe his own, building a base of recipes for all to enjoy. Look out for building projects too, as RIMS has become a fascination of this fledgling homebrewer.