Fruit used to be the red-headed stepchild of beer ingredients.

But put fruit in beer and it suddenly becomes a lower valued product. Beer snobs look down their nose at it, like when people add an orange to their witbier (btw screw you too beer snobs). Your buddies tell you “it’s for girls.”

In the past few years though fruit has redeemed itself. The main reason? Sour beers. Finally fruit has a home in beer. In a “clean” beer fruit turns it into some sort of juice. Or so they say.

In a sour beer however, it adds complexity and intriguing new flavors as the wild yeast and bacteria get their hands on it. The Belgian lambic brewers have known this for eons, but it’s a relatively recent trend in the States.

In this post I’m not going to take the easy way out and name 5 sour beers that use fruit. Nope. I’m proud to say that I enjoy clean fruit beers. Sure some taste like juicy juice, but if you look hard enough you’ll find some excellent ones that are neither sour nor juice-like.

Unibroue deserves more acclaim than it gets. Have you had La Fin Du Monde? My Lord what a beer…

Éphémère Apple isn’t quite on La Fin Du Monde’s level but its special in its own right. This beer
could beer a sports drink. Seriously – you could pour it into a water bottle and drink it in between sets during beach volleyball.

The key ingredient is, big surprise, apples. It’s not like homemade cider though. No, the apples aren’t as
prominent and the body is much lighter. These are my favorite type of apples too. Granny Smith.

The 5.5% abv is surprising because it tastes like there’s no alcohol at all. Drink this one on the patio and you won’t notice much, but pay attention and more depth emerges – bubble gum, wheat, Belgian phenols, and just a bit of spiciness.

Break out this odd & fizzy cider/water/beer this summer. It’s delicious. 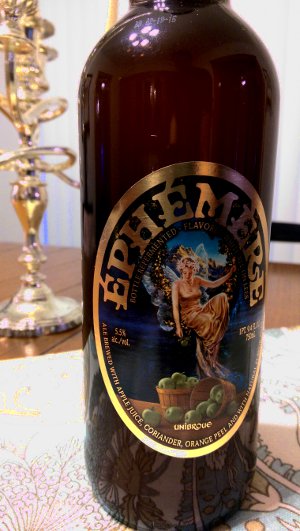 Epic hit the Denver beer scene in a major way. Originally from Utah, they built a massive new brewery
in downtown’s River North district last year. I’ve been a regular ever since.

When I’m not in the tap-room I’m enjoying their fine selection of bottled beer, which are now
plentiful around town.

The “Brainless” series comes in three fruit varieties: cherry, raspberry, and peach. I grabbed a peach.
There is a common saying in homebrewing that if you want a peach beer, use apricot. It’s notoriously
difficult to get a good peach flavor into beer.

How did this one do?

They definitely played it safe with the peaches. They are noticeable but not as obvious as you’d expect from the brochure.

Brainless is a big beer. This batch clocks in at 11.2%. The alcohol warms you up but it isn’t
harsh. The yeast character pins this one as distinctly Belgian. The peach blends well with the
candy-like berry flavors from the yeast. You’ll immediately think of white wine when you drink this,
which makes sense because it’s aged in French Chardonnay casks.

I was skeptical that a delicate fruit like peach could work well in such a high-octane beer. It was a pleasant surprise. 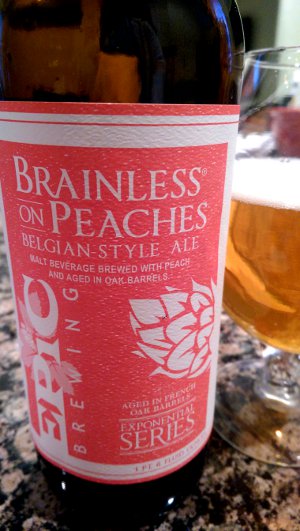 I love Trinity but their bottle art is ridiculous. You can barely read it half the time. I mean look at that damn thing.

Oh well, at least the guys in Colorado Springs are masters when it comes to what’s inside the bottle.

There is so much to say about this beer I don’t where know to begin. The base beer is Belgian, let’s start
start with that. Saison-like but it’s really no use trying to nail down a style for a beer of this nature. We’re talking apricot, ripe banana, pie crust, red apples, Big League chew gum….it packs in a lot.

Then there is the fact that it has almost no carbonation. At least my bottle didn’t. That made it almost like a fruit syrup. Pour this one into a sauce pan and make a reduction. You’ve created a fine glaze.

If you think you know fruit beers, try Pappy Legba and have your mind rearranged. 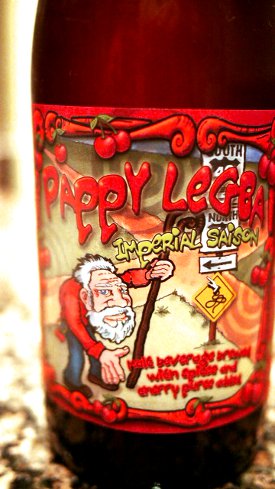 I have to comment on the color of this beer. It’s pink-ish. Yes, a pink-ish amber. Sorry I took a bottle picture. Lame.

Blackberries are an interesting choice for this beer. They come off as surprisingly candy-like. The Belgian yeast esters help with that (a trend in this group by coincidence only).

You’d expect a sweet beer but there is an assertive bitterness which makes it more drinkable. Not a complex beer but unique. I haven’t tried one quite like it. Here’s what the Belgian brewer has to say about it:

Why Blackberries? Blackberries have a wonderful sweetness that is not TOO sweet or full. They are rich in color and aroma and have a unique drying character that is felt across the whole pallet. I am not a fan of sweet beers, so it was important to me that this beer have lots of deep blackberry fruit and a deep respect for the saison’s dry palate. 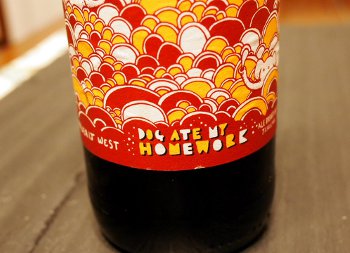 Ah, my favorite of the bunch. A dark lager with cherries – great idea.

The hallmark of this beer is its genuine cherry flavor. Cherries can taste one of two ways in beer: artificial or genuine. The latter is delicious, the former is repulsive.

Fortunately these cherries taste like they were picked yesterday. Unlike the Pappy Legba these are darker cherries, not pie cherries. They are slightly tart and blend well with the clean lager underneath and its toasted malts. A hint of chocolate (like hot chocolate powder) adds another layer which really tops this one off.

One to seek out for sure. 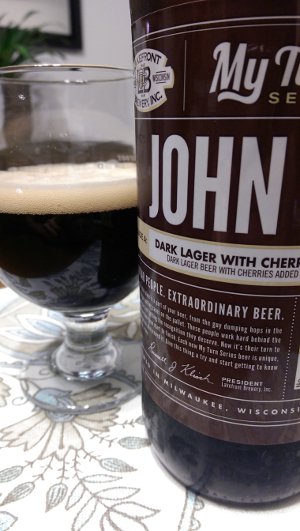 Does anyone else admit to enjoying fruit beers? NOT sour beers. Clean fruit beers. Comment below and let me know which ones you like.