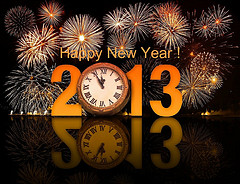 Overall I did OK. I was semi-correct that Asheville would not win BeerCity USA for a fourth time in a row. They ended up sharing the title with Grand Rapids. That NC crew is resilient.

Speaking of North Carolina, I was correct about Sierra Nevada opening a brewery there, although that wasn’t exactly a shocker. AB-InBev never did merge with SABMiller. That was my bold prediction, but I’m not going to renew it this year.

So what does 2013 have in store? I asked my newsletter readers this very question. First, my predictions:

A few weeks ago I asked my newsletter subscribers for their 2013 beer predictions. Over 125 responses came in. They were all great and I’ve posted a handful of them below. Feel free to add yours to the comments.

Here’s to another great year for beer.

2013 will be year one of my homebrewing experience (empire), thanks to the support of Billy!
– Richard

At the end of the day, we will continue to enjoy our beer.
– Corey

My beer prediction for 2013 is:
1. I will be busting my butt to better develop my home brew skills.
2. Lots of barley soda will be consumed.
3. I predict that those crazy kids in the UK (BrewDog) will once again attain the throne for most
potent beer.
4. I predict that you will see a lot more nano breweries in your local area.
5. I believe that Billy Brew will continue to provide excellent information on the brewing phenomenon
that we all love!
Thanks for the great info and blog. Happy Holidays!
– Christian

Rise of the white stouts.
– Zach

Stone will finally settle on a home for their European brewery. Mega breweries will continue to lose market share. Victory brewing will annouce western expansion.
– Gene

My 2013 specific prediction: A top 10 craft brewer will be acquired or partially acquired by larger company. My specific guess would be Magic Hat or Harpoon. A merger or joint venture of an east-coast and west coast brewery could also happen (instead of opening a new production facility on the opposite coast.)
– Matthew

Mississippi WILL legalize homebrewing this year. With 2 craft breweries opening in Mississippi this month, I foresee 3-4 more opening in 2013. Cheers!
– Wick

The new trends will come from the desert southwest with new brews like:

My mouth is watering already.
– Michael

I foresee no decrease in the rapid growth of many craft breweries . . . at least not for another couple of years. I also expect to see more brewery gastro-pub type “spin-offs”, such as we have here in the Tampa Bay area with Cigar City’s incredible Peg’s Cantina, just south of St. Pete, and the soon to be open Cigar City Brew Pub on the north side of Tampa.
– Ed

My prediction for the next year in beer is to see the Farm to Fork idea expand into Barn to Beer. I think with increased growth of the craft beer market more brewers will make beer that is indigenous to their neighborhood. I expect new “styles” to form as the individual beer communities develop.They will use ingredients only found geographically close and that pair well with food from that region.

Billy,
I am a huge fan of craft beer and love all the new introductions and flavors that are poping up in the beer industry just about everywhere you look. I will predict in 2013:
President Obama will talk to the American people in front of a fermentation tank at a micro brewery to demonstraite that small business is alive and well in America.

120 new micro brewery’s will open in the US in the next 12 months, two in Boulder alone.

Aging in wine and whiskey barrels will become extremely popular.

GABF and Big Beers of Belgium will break all previous attendance records.

Colorado will produce the first Weedbeer.

Medical professionals will announce that drinking 8 oz. of craft beer extends the life of humans.

With the huge growth of craft breweries we will see more commercial brewers pushing the limits of what defines a beer. I believe that home brewers and long time craft beer drinkers are going to step back to traditional quality beer. While not completely abandoning extreme beers I think the balanced simplicity of malt, hops, yeast and water is making a comeback. A pessimistic prediction I fear is a backlash from the big three brewers. As they lose a growing share of the market I think they will become more aggressive in their attempts to acquire smaller breweries and squeeze out others.
– Fran

This is a tough one, the explosion of craft beer (Just read the licensed brewery numbers for 2012 is the highest ever) has produced so many options that almost every idea has been tried before to some extent. I know it was a “anti-prediction” of yours last year, but I am going to predict that more breweries will be creating session beers as staples in the beer lineup.
– Shegogue Brew

1. InBev will complete it’s aqusition of Corona. Then just like it did with Beck’s…it will change the recipe to be more profitable. InBev will then set it’s sites on Samuel Adams.

3. These craft breweries will grow to the point there will be another category…the Mini Brewery. A level between Micro and Macro.
– Keith